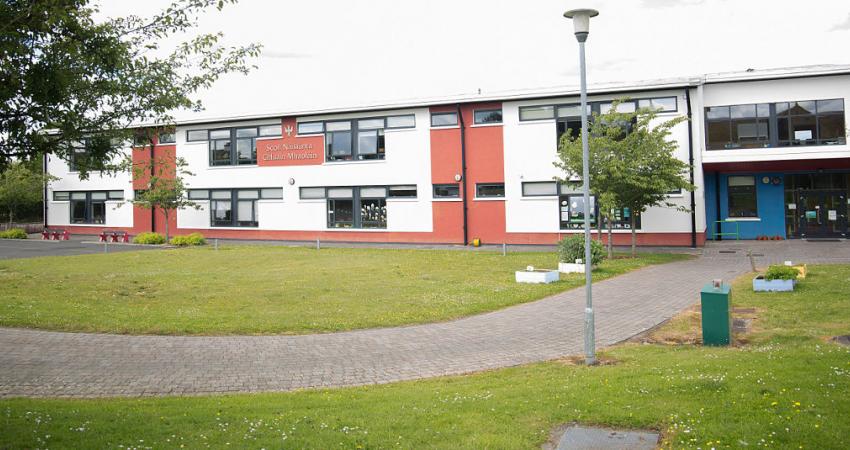 Clonmellon National School serves the Parish of Clonmellon / Killallon and the surrounding area.  The present school is an amalgamation of a number of smaller schools that once served the Parish.  These were Cloran, Killallon, Geehanstown / Archerstown, and the Boys and Girls National Schools in Clonmellon.

Tradition has it that there were several hedge schools in the area before the first National school was built in Clonmellon in 1833.  This was replaced in 1844 by a building that lasted until 1975 (when it was demolished to make way for a new school).  This building was commonly known as the Girls National School.  The boys, meanwhile, were accommodated in the Rent Agent’s Offices donated to the Parish by local landlord Sir Montague Chapman and commonly known as the Parochial Hall.  This is now the local Credit Union office.  In 1936 a new school was built to accommodate the boys and this building still stands today.

In 1969 Clonmellon girls’ school, Clonmellon Boys’ school and Cloran NS amalgamated using the two existing buildings – one for the Junior end of the school and one for the senior end.  The oldest building, the original girls’ school, was demolished in 1975 to make way for a structure which was built to coincide with the amalgamation of Killallon NS and Archerstown NS with Clonmellon NS.  This opened as a 6 teacher school, with 2 classes housed in the 1936 building.  Following an increase in enrolment, this building was extended by the use of pre-fabs to accommodate 8 classes.  In 2010 a new 8 classroom school was completed to replace the 1975 building which was then demolished.

A National School was built in the townland of Cloran in 1842.  This building is now a derelict residence.  It was replaced in 1932 and remained open until 1969 when it was amalgamated with Clonmellon Girls NS and Clonmellon Boys NS to form a co-educational school with four teachers. Cloran NS building is now a private residence.

In 1847 a national school was built in Killallon.  This was a boys’ school but a classroom for girls was added later. This school closed in 1975 and was amalgamated with Clonmellon NS.  The building is now used as a local community centre.

Also in 1847 a national school was built in Gehanstown.  It also started as a boys’ school with a classroom being added for the girls at a later stage.  It was closed in 1962 and left to fall into complete disrepair.  It was replaced by a pre-fab building in Archerstown the same year.  Archerstown school was closed in December 1975 due to amalgamation with Clonmellon NS. and the pre-fab was used as a community centre.